High inflation is cooling the UK’s housing market and bringing an end to the frenzied period of property-buying which played out during the pandemic, according to housebuilder Redrow.

Redrow reported underlying pre-tax profit of £410mn for the year to July 3, up almost a third on the £314mn recorded in the previous year as revenues rose 10 per cent to £2.14bn. However, statutory pre-tax profit fell as the company set aside £164mn to cover historic fire safety issues.

The jump in underlying profits was driven by high housing demand. Transactions surged during the pandemic as buyers looked for larger homes or properties further from their offices and those who had been able to save during lockdowns invested in houses.

That has been a particular boon for Redrow, which builds larger properties than rival housebuilders.

“Their typical house is [a] four-bedroom Arts and Craft [home]. That’s hitting the sweet spot for the market,” said Chris Millington, an analyst at Numis.

Demand for new homes is now cooling, but there is little clarity on how sharp any correction might be. The market is pricing in a dramatic housing slowdown that will hit sales and values.

Redrow’s shares have fallen 31 per cent since the start of the year, with the sector down about 40 per cent. In recent weeks, banks including HSBC have published a series of gloomy notes predicting house prices will slide as a result of high inflation and rising interest rates.

Pratt dismissed the forecasts as “a bit doomsday” and the company reiterated its guidance for 2024, forecasting revenues of £2.3bn to £2.4bn. 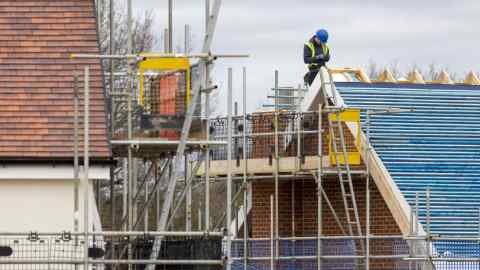 Millington added: “It’s a bit of a phoney war out there at the moment: builders are saying ‘the market is moderating but it will be fine’. Others are saying ‘it’s going to be financial crisis-level’.”

He predicts a slowdown, not a crash, because forced sellers are largely absent from the market and the rental market is not an attractive alternative for sellers.

“People will cut back on cars, leisure, food and bills before they chuck their house on the market and consider the rental market,” he said.

Developers are also navigating the removal of the government’s Help to Buy scheme, an equity loan designed to support buyers that has been in place since 2013.

Redrow said the loan scheme was used in 8.6 per cent of sales in the past financial year, down from 28 per cent last year, as the sector weaned itself off government support.