Rising rents and utility bills are boosting interest in smaller, cheaper rental properties at the expense of larger, more expensive houses in the UK, according to research from the property portal Zoopla.

The data, published on Tuesday, showed that 35.4 per cent of inquiries to estate agents about properties in July and August this year were about two-bedroom flats, up from 29.8 per cent in 2020.

In the same two months, the proportion of inquiries about three-bedroom houses was 12.1 per cent, down from 15.9 per cent in 2020.

The figures come amid growing criticism of the state of the housing sector, with soaring rents leaving more tenants at risk of eviction because of the cost of living crisis.

Richard Donnell, Zoopla’s executive director of research, said rents had “surged ahead” over the past year, although there were signs that the pace of growth was peaking.

“Renters are responding and looking for smaller, better value-for-money homes to rent with an eye on energy costs as much as rental levels,” he said.

Zoopla said that, on average, the amount of gas needed to heat a purpose-built two-bedroom flat for a year was 40 per cent lower than for a terraced house. The figure for a flat conversion was 25 per cent lower.

This imbalance helped push the rate of rent rises up to an annual rate of 12.3 per cent for the year to July, according to Zoopla. The corresponding figure a year earlier was running at just 2 per cent.

Donnell said the rental market needed more new homes for rent to counteract the upward pressures on prices, adding: “Greater regulation has seen less new investment and a small but growing number of landlords selling up, meaning the rental market has stopped growing since 2016.”

Zoopla said average rents for all properties had risen by £115 from last year’s average level of £1,051 a month. That figure represented 34.4 per cent of the average income of a single renter, it added.

The rises were particularly sharp in the biggest urban areas. On average, rents in London rose 17.8 per cent in the year to July. In the same period, they increased by 15.5 per cent in Manchester and 14.4 per cent in Glasgow.

Growth was slowest in north-east England, where the rise was 7.6 per cent.

Zoopla predicted, though, that rental growth would slow from its current levels in the last quarter of 2022 and next year. 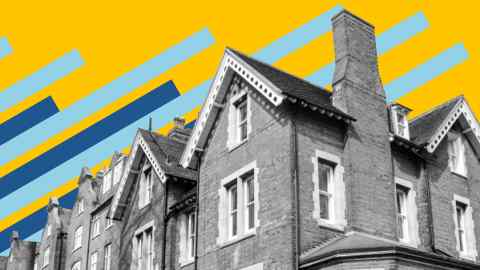 Its research is the latest evidence of the rapid rise in the UK’s housing costs because of a mismatch of supply and demand. Many buy-to-let landlords have sold properties since the onset of the coronavirus pandemic to reduce their exposure to the sector.

There have also been indications that landlords are selling properties to avoid increasingly stringent regulation. Such measures include a plan, announced last week by the Scottish government, to freeze rents in both the private and social housing rental markets.

Donnell said there was a risk that more regulation to improve standards or hold back rental growth would compound the supply problem.

“Policymakers need to tread a careful path between protecting consumers and ensuring a decent supply of homes for rent,” he said.

“A lack of affordable homes means competition for new rentals is fierce,” said Neate. “It’s no wonder tenants are being priced out of their local area or forced into cramped one-bed flats just to find a new home.”